I'm due to give blood again soon. So, like a good person, I went to blood.co.uk and tried to book myself an appointment via the webform. Then I remembered what the webform looks like: 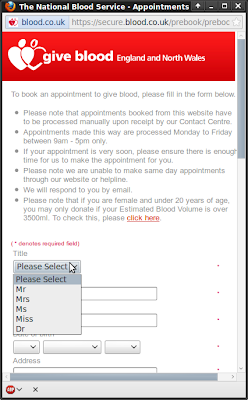 Note that mandatory field right there. If you want to cut down on faff (both for you and for the blood service) when you give blood, you have to - have to - be comfortable being addressed by one of Mr, Mrs, Ms, Miss or Dr.

I think I'll just drop in and hope they've got a bed free. And so, I expect, will any Professors, Reverends, Sisters or Imams who turn up.

This might sound petty or facetious to you. After all, not many people feel distressed to the point of self-exclusion by being forced to identify themselves as either Mr, Mrs, Ms or Miss (even if they're actually Dr). But I, as it happens, am one of them. We're a minority, but there's quite a lot of us. We even have our own national campaign.

Here's a fun fact: in the UK, your title has no basis in law. If you're male-assigned, you're not legally obliged to call yourself "Mr [Surname]", just like female-assigned people can request to be referred to as "Miss" or "Ms" according to their preferences; what's more, they can adopt the title "Mrs" even if they're not married, and vice versa. Therefore, all these thousands of organisations who have mandatory title fields on their webforms are gaining essentially zero information by it. I strongly suspect that it's only requested (or rather, demanded) so that they can painlessly auto-fill the greeting "Dear [Title] [Surname] on their automated email replies. This can lead to hilarity when an organisation tries to be inclusive but doesn't quite think about it hard enough: a (binary-identified, incidentally) friend of mine selected the helpful option "Other" on a webform once, and got the response "Dear Other [Surname]"...

Mr, Miss, Mrs, Ms (etc.) are known as "courtesy titles"; that is, by saying "Dear Mrs Exampleface" instead of "Oi, Vera", correspondents (even automated ones) are supposed to be being courteous. But for many trans* people, it ends up being the other way round: we have to do the organisations the courtesy of selecting one of their woefully inadequate options. And while this is a minor annoyance on a webform, when individual correspondents know someone's trans* (like, for example, when they're the psychiatric "professionals" who are meant to be objectively reviewing someone's suitability for referral to a gender identity clinic), the "courtesy" title can become a vicious, disgusting weapon for making their prejudices clear.

The gender-neutral title "Mx" (or "Misc") won't solve all of these problems. But the more widespread and well-known it becomes, the more it can help English-speaking society to become more inclusive. Simply including it on a webform will help gender-variant people, or cis people who are uncomfortable with being asked for unnecessary personal information, to feel more accepted. Meanwhile, those people who are blithely ignorant of gender issues are more likely to learn about them, and become more sensitive towards them, if they regularly encounter this strange new option on the drop-down menu and it piques their curiosity.

And, importantly, "Mx" doesn't have to be - shouldn't be - a title reserved only for non-binary-gendered people. It would actually be an incredibly useful resource at times when you're corresponding with a stranger and you're not sure whether ey's Mr or Ms. (This happens an awful lot in my office, and some of my colleagues waste ridiculous amounts of time googling "[foreign first name] gender" just so they can send a flipping letter.) We've all had someone take a punt and address us as "Miss" when we're actually "Ms", or as "Mrs" when we're actually "Dr" (or as all manner of things if we're called Sam, or Chris, or Alex, or...), and we smile, correct em and move on. If everyone who was unsure defaulted to "Mx" on first contact, it would work exactly the same way, but with a lower embarrassment/faff factor.

What's more, the receptionist at the medical institution who loudly calls out "Mr [Patient]?", when ey knows full well that the patient is, or might be, a trans woman, would no longer be able to innocently declare that ey "wasn't sure" or that the patient's first name "sounded like a man's name". Because in that case, ey bloody well could have, and should have, defaulted to Mx. Out of courtesy. And everyone in the waiting room, and at the institution, and who responds to formal complaints against receptionists, would know that.

But this will only happen if the gender-neutral, status-neutral, assumption-neutral title "Mx", or its variant "Misc", or both, becomes more widespread. And as a linguistics graduate, I can assure you that the way to make a new word widespread is to use it. The UK Deed Poll Service has already started accepting it. The more examples we can give of it being used in official documents, like bank statements or council tax bills (I treasure mine proudly), the more leverage we have when trying to convince other organisations to include it in their databases.

I'm slowly beginning the long and irritating process of trying to get my title changed in all my records to Mx (and complaining when I can't). It's the teaspoon effect - it's a tiny action, and it's a drop in the ocean of the status quo, but every drop has ripples. If you're a binary-identified ally reading this, what are your teaspoon options? Well, there's a petition you could sign, for a start (incidentally, the petition claims that Mx is short for "Mixter", which many people dislike somewhat or suspect to be unfounded, but I'd sooner sign a slightly dubiously worded petition than none at all). But since you're not legally obliged to use a title which reflects your gender, or your marital status, or anything else, you could always consider doing the same as me.

Think about it. Think hard, and fully explore the vague, irrational discomfort you feel when you imagine calling yourself Mx [Surname], and getting letters addressed to it, and and having it called out in doctors' wating rooms. Now reconsider whether I'm really being so petty.
Posted by Ganymede at 14:51

Email ThisBlogThis!Share to TwitterShare to FacebookShare to Pinterest
Labels: language

An advert for something I approve of

If you can't see it, you probably have AdBlock, which I also approve of.

Sharing/backlinking/commenting (even on old posts) are welcomed and encouraged. Uncredited stealing isn't.